EPK company makes the list of 400 non-public private companies of Russia which export their products to Europe (Expert). 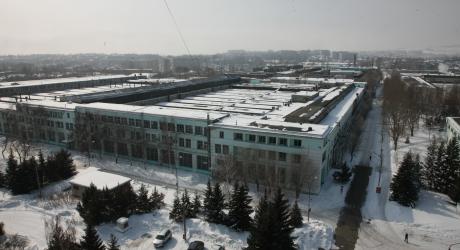 EPK in Saratov together with Ministry of Industry and Energy of the Saratov region is finishing the first stage of the project «Economy of heat energy resources».

Implementation of the project began 2 years ago. The project provides two stages. At the first stage screw compressors of low and average power for production of compressed air are established. Operation of the old turbine compressor in capacity of 1,6 MWt is thus excluded.
The II stage of "Economy of heat energy resources" project on EPK in Saratov is a refusal of heat supply from city networks. Elimination of a steam boiler room, installation of block modular boiler rooms and transfer of heating of plant buildings from water to gas infra-red radiators is provided.

Sergey Rozhkov, the engineering manager of EPK plant in Saratov, told which actions are introduced at the enterprise nowadays: "The compressor equipment of VV 65/7, and also block and modular boiler BMK of 3,721 MWt is acquired and established. Besides the electric equipment modernization is made. It allowed to transfer processing equipment from steam to electroheating and to make preservation of the old boiler room".

The following step of implementation of the project is acquisition and installation of a block and modular boiler room of 10 MWt, that will allow to refuse supplying heat from city networks partially. Completion of the works on this stage is planned for 2012.

After introduction of the second block and modular boiler room the design and exploration work on the equipment of a part of production divisions with economic gas, local systems of heating, providing reasonable calculations of the necessary quantity of the thermal equipment, will be carried out. Realization of this stage is planned to carry out in 2013-2014.

In his special interview for EPK press service Sergey Lissovsky, the minister of the industry and power industry of the Saratov region, explained the position of the department concerning the companies realizing such the projects:

- The government of the Saratov region will support such projects since power efficiency is considered as one of the resources of economic growth. In the Saratov region the mechanism of decrease the power consumption of economy works nearly 15 years.

The project "Economy of heat energy resources" realized on Saratov Bearing Plant is practical implementation of the regional program "Energy saving and increase of power efficiency in the Saratov region for the period till 2020". The project is a pilot and it is planned that the experience of the plant will be useful and will be an example for other enterprises. For this purpose it was presented on the Club of technical directors and chief engineers of the region and Board of the Ministry of Industry and Energy of the Saratov region.